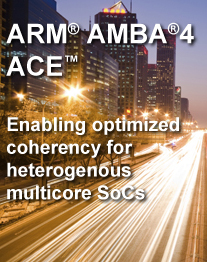 At DAC I talked with Mike Dimelow of ARM about the latest upcoming revision to the AMBA bus standards, AMBA 4. The standard gets an upgrade about every 5 years. The original ARM in 1992 ran at 10MIPS with a 20MHz clock. The first AMBA bus was a standard way to link the processor to memories (through the ARM system bus ASB) and to peripherals (through the ARM peripheral bus APB). Next year ARM-bsed chips will run at 2.5Ghz and deliver 7000 MIPS.

Eric’s story of Thomson-CSF’s attempt to build a processor of this type of performance in 1987 points out that in those days that would have qualified as a supercomputer.

The latest AMBA standard proposal actually steals a lot of ideas from the supercomputer world. One of the biggest problems with multi-core computing once you get a lot of cores is the fact that each core has its own cache and when the same memory line is cached in more than one place they need to be kept coherent. The simplest way to do this, which works fine for a small number of cores, is to keep the line in only one cache and invalidate it in all the others. Each cache monitors the address lines for any writes and invalidates its own copy, known as snooping. As the number of cores creeps up this become unwieldy and is a major performance hit as more and more memory accesses turn out to be to invalidated lines that therefore require an off-chip memory access (or perhaps another level cache, but much slower either way). The problem is further compounded by peripherals, such as graphics processors, that access memory too.

This entry was posted in Uncategorized. Bookmark the permalink.