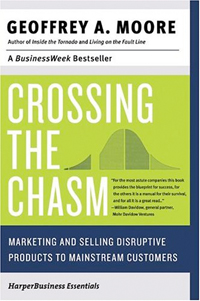 The most influential book on hi-tech marketing of the last twenty years or so has to be Geoffrey Moore’s Crossing the Chasm. I doubt that there is anyone in marketing reading this blog who has not read it. In fact everyone in hi-tech should read it since it affects not just how products are marketed, but how they are developed, where investment needs to be made and how, and generally what is required for a hi-tech product such as an EDA tool, software product, semiconductor chip or a system. If you are in engineering wondering why your product marketing manager is insisting that you stop work on the new whizzy feature for the next version in order to make sure that the current version reads some obsolete format of library then this book makes it clear why.

The key insight of the book is that the mainstream buys for different reasons than early adopters. As a result, it is much harder than you would expect to turn success with early adopters into success with the mainstream. Getting from this early success to the nirvana of mainstream adoption is crossing the chasm, the chasm being the fact that you can burn all of your money trying to get across unsuccessfully if you ignore what is necessary for success.

The big idea in Crossing the Chasm actually comes from an earlier book by Bill Davidow published way back in 1986 Marketing High-technology (still in print), which first introduced the idea of the “whole product.” However, Geoffrey Moore did a much better job of explaining it and the chasm metaphor was a much more viral image. 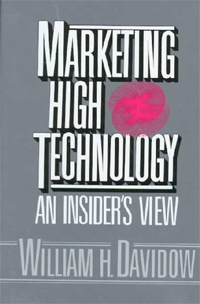 Early adopters will do their own work to make up for deficiencies in your product, especially tailoring it to work in their environments, adding missing scripts or libraries and generally working out how to get the most value out of your product. Mainstream customers will not do that. You need to deliver them everything that you need, the whole product. You may not need to deliver all this yourself, but you need to create an ecosystem so that everything is available.

A good example is the early days of Synopsys. You can sell a synthesis product like Design Compiler (DC) to a few early adopters on the basis that they will do their own work to take existing simulation cell libraries and manually create the .lib libraries necessary for synthesis. However, the mainstream will not. The mainstream wants the whole product, one that they can use from day one. This means not just DC but also .lib libraries for whichever library they happen to want to use for fabrication. So in the early days Synopsys had a huge group of engineers creating these libraries for the ASIC vendors. I think Bob Dahlberg, who ran the group, told me that it peaked at 200 people. Within a year the ASIC vendors realized that they needed to do this job themselves since they didn’t want Synopsys’s library group to be on their critical path to revenue from a new process node.

This shows another point, that once you start to achieve success in the mainstream, you become part of someone else’s whole product and they need to support you to be successful themselves.

The whole product becomes a barrier to entry too. Once Synopsys had all the ASIC vendors on-board, they were not likely to want to create libraries for other synthesis tools. So Mentor’s Autologic, Compass’s ASIC Synthesizer, Trimeter, SILC and all the other struggled not just because Synopsys could invest more in developing synthesis but also because nobody else could get the whole product together easily.

And here’s someone who gets it, although isn’t sure what to do about it. Chris Wilson, the CTO of NuSym, complains that there is now so much infrastructure required in a simulator (3 versions of the API, several testbench languages, Verilog, VHDL, SystemVerilog, C) that it takes all their effort just to do that and very little is used to deliver the core differentiated technology. Of course it would be convenient for him if someone else provided all that so that they can focus on their core technology, but nobody does. Synopsys didn’t want to develop ASIC libraries either. But he knows he won’t be successful without full compatibility.

Coincidentally, both Bill Davidow and Geoffrey Moore both ended up in the same venture capital firm, Mohr-Davidow Ventures (MDV). When we finally got MDV over the finishing line to invest in VaST while I was there, we ended up being invited to a half-day meeting with Geoffrey Moore. This lead to a dysfunctional conversation since I knew that the Mohr in the name of the company was spelled differently so I figured that somebody was confused about who we were meeting. But I was wrong: Geoffrey Moore was (and is) a partner of MDV. At that point VaST was having some early success in a handful of companies, mostly in Japan, and so we spent a very interesting afternoon brainstorming how we could create an ecosystem of models which we all knew was the main barrier to getting across the chasm.