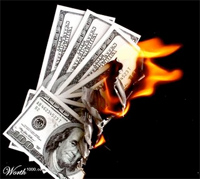 So obviously cash is so important in a startup that it should never be spent? Well, not so fast. I’ve seen some really silly decisions about how to save money in startups over the years.

Most of the cash being burned in a software startup goes on engineers’ salaries. Consequently it makes sense to do everything to make their work environment as productive as possible. Do not force them to use old computers because they are already around. Computers are pretty cheap these days, a few days of an engineer’s salary will buy you something really high end. Do not equip the servers with so little disk space that they have to delete old data that will eventually turn out to be useful. Terabyte disk drives are under a hundred dollars. And don’t forget to make it easy for your engineers to work from home, by having good VPN and paying for them to have good internet connections. You pay your engineers more in an hour than their internet connection costs for a month.

One thing we discovered at Envis was that companies that provide PCs for gamers deliver the most bang for the buck. They overclock the designs, add special fast memory, have custom motherboards and so on. For a lot less than Dell will sell you a machine, you can get one that is half as fast again, with lots of cores. And a bonus, they look really cool.

In a semiconductor company, there is an additional significant cost, namely design tools. Sometimes this is a cost in a software company too since they need tools for quality assurance and integration purposes. This is a hard balance to get right since too few tools again means that what looks like saving money on tools is really burning extra money on engineers’ salaries. Too many tools obviously wastes money more directly. When I was at Cadence we had a venture investment program where we would provide almost unlimited tools to startups for a mixture of cash and an equity position. We’d discovered that most startups underinvested in tools because they were so expensive but that this jeopardized their success.

Benefits, especially medical, are another area where startups can be penny wise and pound foolish. The most cost effective way to handle medical benefits, given that usually everyone is young and fit, is a combination of catastrophic coverage and a health savings account (HSA). In fact this is probably the best way to handle medical period, but that’s a political hot potato right now. It is what Whole Foods does and what John Mackey, the CEO, has recently got into trouble with the left for recommending as better than what congress is attempting to put together.

Bottom line: remember Gordon Bell’s line that cash is more important than your mother. But remember that engineers’  salaries are your biggest investment, and it is foolish not to do everything to make that investment as effective as possible.

This entry was posted in finance, management. Bookmark the permalink.