The book that changed everything 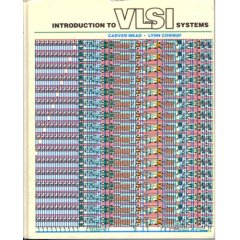 Until 1979, IC design was done by specialists who understood every aspect of the design from semiconductor fabrication, transistor characteristics, all the way up to small blocks of a maybe a thousand gates which was the limit of chip fabrication in that era. In the late 1970s this “tall thin man” approach started to break down. Design was getting too complex for people who understood the process to do it, and the process was getting sufficiently complex to become the realm of its own specialists.

Everything changed thirty years ago with the publication of Mead and Conway’s book “Introduction to VLSI systems.” It is out of print but it was the most influential book in semiconductor design and design automation ever.

Mead and Conway separated design from manufacturing by creating simplified design rules for layout, and a simplified timing model suitable for digital design. No longer was it necessary to understand every nuance of the fabrication process, no longer was it necessary to consider every transistor as an analog device. The most important aspect of this is that it meant that computer scientists could design digital chips since they no longer needed deep electrical engineering knowledge.

I was at Edinburgh University at the time, finishing up my PhD (in computer science, not electrical engineering). John Gray, who had run Carver Mead’s silicon structures project at Caltech on sabbatical from Edinburgh returned carrying galley proofs of the yet-to-be-published Mead and Conway book. He ran a course based on this, one of the first on IC design in the UK I presume, heavily attended not just by the students who were meant to be on the course but by many of us faculty too.

Design became the province of computer scientists who understood enough about layout, enough about timing, enough about architecture and enough about test to successfully create state-of-the-art chips. Indeed, they could do so more effectively than the electrical engineers since chips were getting to be too large to do entirely by hand, and computer scientists already knew how to deal with complexity. They also started to create the first EDA tools, simple layout editors, simple simulators, rudimentary design rule checkers, because their natural instincts were never to do anything by hand if you could create a program to automate it.

Mead and Conway’s book created a cohort of IC-literate computer scientists who went on to populate the CAD groups of the semiconductor companies and, eventually, the EDA industry once it got going.

To see how big a difference it made, look at analog design versus digital design today. Analog design is largely done today the way digital design was done until Mead and Conway: deeply expert designers with the raw process models, raw design rules and polygons.

The next big change would be the invention of Verilog and RTL synthesis that meant that computer scientists could design complex chips with almost no knowledge of how chips worked, what a transistor was, how a chip was made. This new layer meant that front end designers and back end designers were different people with different skill-sets.

We seem to be on the cusp of another such layer with ESL tools starting to become much more widely used, allowing designers with very little hardware knowledge at all to create complex systems. The layer above that is software, already well-understood and with its own culture and tools.