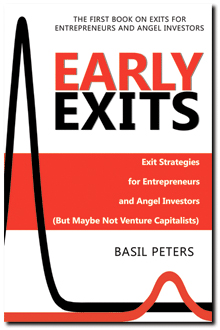 I came across the book Early Exits recently. It is definitely worth a read, especially for anyone having anything to do with EDA startups. An early exit is one after a relatively small number of years at a relatively small multiple to the original investment. As I discussed earlier, VCs don’t like this sort of deal in general. They need big returns on at least a few of their investments and they don’t care that much about the rest. Early exits don’t interest them.

There are a number of reasons that EDA startups are not getting funded by venture capitalists any more. The most obvious is that large EDA companies have stopped buying them at high valuations. This is for a mixture of reasons but one is that standalone tools are harder to ramp up profitably without tightly integrating them into the main body of pre-existing tools. For example, standalone statistical static timing is interesting, but much more important is integrating statistical static timing into the synthesis, place and route flow. Don’t just find the errors after the fact, stop them occurring in the first place.

But a second reason that EDA startups are unattractive is that they don’t require enough money. Venture funds are growing larger and it is a fact of life that being on the board of a company looking after a $3M investment is about the same amount of work as looking after an investment of $30M. If a fund is large, it can’t afford to dole it out $3M at a time; that requires too many investments. Instead, fewer but larger investments are required. This means that the size of investment is too large for an EDA company. Too large in two ways: too large since EDA tools don’t require that much capital to develop, and too large since the exit price required to make the investment successful is higher than is likely to happen.

I’ve been somewhat involved with several startups recently who are looking about how to raise a little money. Relatively small amounts are needed and venture capitalists are simply not the place to go looking. Individual investors (angels) and corporate investors (customers) are much more likely. New technology continues to be needed and this type of investor can live with the likely return on a successful company.

The new rules are raise only a tiny amount of money, run the company on a shoestring, validate the technology with some initial sales and exit earlier rather than later. If you wait, you will need more money to build a big channel, and any acquirer will have to tear it down anyway. EDA startups spend more money building sales channels than technology, and one thing Cadence and Synopsys don’t need more of is channel.