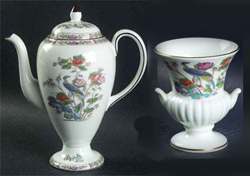 My father-in-law was an executive at Wedgwood and responsible, among other things, for pricing every piece of china they made. Wedgwood has recently been run into the ground by Waterford Crystal who had acquired it, and it is now in administration (roughly chapter 11), but that is another story.

Anyway, a Wedgwood coffee pot sold for $80 (I’m guessing these numbers). It is a complicated piece to make consisting of a body, a handle, a spout, a lid and a little piece that goes inside to stop all the coffee grounds going down the spout. However, if we throw away the lid, don’t bother to put on the spout, forget the handle and the little filter piece then we have a much simpler item. It’s a vase. It sells for $100. Paradoxically, the vase, which is much simpler to manufacture, has higher value to the consumer and so sells for a higher price.

It is important not to assume that the value to a customer of every product is a fixed industry markup over its cost. That will be true in a competitive mature market since any differentiation that leads to a higher price will get copied and competed away, but it is not true when products are differentiated. That is why it is so important to have differentiation, otherwise you are stuck selling silicon at a small markup to cost and you probably are not the lowest cost supplier. You either want to be Walmart (lowest cost supplier) or Whole Foods (lots of differentiation), not Safeway.

When I was at VLSI Technology in the late 1990s, one of the things I did was help run the strategic planning process for VLSI’s communication business (mostly GSM chips). We had a relationship with a French company called Wavecom that had a GSM software stack and a GSM radio design. VLSI made the baseband chip. At the time, understanding the GSM standard well enough to build a baseband chip was a big differentiation, and we were one of a couple of semiconductor companies with a standard product, which gave us some pricing power. But it was easy enough to see that, just as had happened in the PC chipset business, lots of competitors would enter the market and it would become a cutthroat cost-plus business. Digital design, no matter how complex, is not defensible for long. I told our communication group that we had better have a plan for acquiring Wavecom (which didn’t want to be acquired, certainly at any price we could afford) or else we should have a plan for finding a new software/RF partner since that is where the differentiation would move. Otherwise we would eventually get pushed out of the market. In the end Philips Semiconductors acquired VLSI in a hostile takeover, and they already had a software stack and RF and so the problem got solved that way. But it wasn’t a message the communication division wanted to hear since building those chips was so hard they wanted to believe that it would continue to be differentiation for a long time.

Software has a disadvantage over hardware in that the manufacturing cost is known. It is basically zero. All the cost of software is really an R&D cost being amortized over product sales. It is like a pharmaceutical business in that sense, pills that are incredibly expensive to formulate but incredibly cheap to manufacture. But unlike the pharmaceutical business where IP protection works, there is very little that can be done in practice to keep a product proprietary. It is thus hard to keep differentiation and pricing power for long. And hard even when there is no competition. Hardware accelerators such as Cadence’s Palladium or Eve’s products have a large hardware cost and sell for a high price. But despite that proven value, you know that if a software product had the same performance it would not sell at the same premium price point.

Of course these things are relative. In most software businesses, the prices we get for EDA tools are prices that other companies dream about. This is a challenge as the ESL market grows and starts to meld with the embedded software market. We may think a Verilog simulator is cheap, but it is a lot more expensive than a compiler or a debugger (even ignoring open source where the price is often zero). But that is a topic for another day.

The main implication for EDA is that the value of a product is determined by the customer not by the EDA company. There is plenty of pressure from customers to reduce prices on non-differentiated products, but very little from the EDA companies to get more return from the strongly differentiated products. Too many coffee pots and not enough vases.

This entry was posted in marketing. Bookmark the permalink.