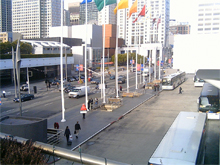 The design automation conference (DAC) is later this month in San Francisco. Trade shows in general are probably gradually dying. I doubt we’ll be going to them in ten years time. But rumors of their death are somewhat exaggerated. DAC will probably be in San Francisco longer than the Chronicle.

Marketing in EDA these days is very difficult since the channels don’t exist in the way that they used to. Both EETimes and EDN have laid off their seasoned EDA journalists (Richard Goering from EETimes, now at Cadence, and Mike Santarini from EDN, now at Xilinx). The big EDA companies stopped advertising, which meant that the books couldn’t financially justify covering the industry. This was an unwanted side-effect of what was probably a reasonable decision. It’s never been clear whether advertising in the print edition was ever a good financial decision, but as more and more eyeballs went online it certainly got worse. Online advertising rates are just not as high, and there is a limit to how much a publication can annoy its customers with flashing adds, peel-back corners and stealing the screen for an enforced video.

So DAC is left standing as really the only marketing channel that works. It works in the sense that the major decision-makers from the EDA customers all come to DAC. DATE will presumably continue as a great conference but I doubt its tradeshow will recover as a must-attend event (and since it costs about the same as attending DAC, even a European EDA company will go to DAC if it can do only one). Japan still has its local shows too.

The big EDA companies are all going this year. I think it is foolish when they don’t attend. This is partially because they need to be seen to be good corporate citizens and not attending is unnecessary insulting to everyone else in the industry. They also tend to generate unnecessary bad publicity if they stay away. However, it is simply uneconomic for them to come in the strength that they used to (when I was at Cadence we’d have 5-600 people at DAC, running 50 demo suites). The “tax” from DAC itself, the conference center, the unions and everyone makes it a lot more expensive than running their own one-company shows.

Clearly, for the small companies, DAC is their one opportunity to get noticed other than people falling onto their website from a search engine. Not attending is tantamount to admitting you either no longer exist or are about to die. Envis, where I was recently interim CEO, has apparently pulled out of DAC. I don’t have an inside scoop on what it means but it doesn’t seem like it would be good.

If you work in marketing, DAC gives an interesting insight into the problems of GM or United Airlines. It is the one time when us silicon valley types have to get involved with union work rules. It costs more to get your equipment from the loading dock in the conference center to your booth space, than it does to ship it there (and this is true in Las Vegas or Annaheim, not just when DAC is local in San Francisco). You have to use a certain number of hours of labor whether you need it or not. You have to pay hundreds of dollars for someone to vacuum your carpet each day, since you are not allowed to do it yourself.

I said above that all the major decision makers from EDA customers are at DAC. Depending on your definition of “decision maker” that is anywhere from a few dozen to a few hundred people. The whole of DAC is really for them. Whether the junior engineers and academics show up simply doesn’t matter that much (for the tradeshow, the accompanying conference would be nothing without academic participation).