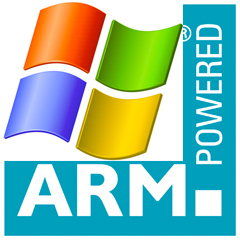 My gut feel is that a mobile-internet-device will be more like a souped up smartphone than a dumbed down PC, and so Atom will lose to ARM. In fact I think the smartphone and MID markets will converge. Microsoft will lose unless they port to ARM.

Since I wrote that before the debut of the iPad, when lots of people wiser than me were holding the view that netbooks/tablets etc would all need to be Windows-compatible and thus Atom-based to be successful, I think it was a reasonably prescient view.

Yesterday, Bloomberg and the Wall Street Journal reported  that Microsoft is porting a version of Windows to ARM and will debut it at the Consumer Electronics Show in January. Of  course Windows Phone 7 already runs on ARM (specifically the Dragonball processor from Qualcomm) so Microsoft is not a complete stranger to ARM.

The WSJ article says that nothing will be available for two years, which, if true, makes saying anything at CES the ultimate pre-announcement. Indeed, it is a reasonable question to ask whether anyone will care by then. If Microsoft is going to have an ARM-based tablet operating system then I don’t think it can wait that long. Somehow in the mobile, smart-phone and tablet part of the market they never seem to miss an opportunity to miss an opportunity.

The likely loser in all of this is Intel and the winner is ARM and, if they produce something that gains market acceptance, Microsoft. With Windows on ARM, I think that the tablet (iPad-like) market will be largely ARM-based (just like smartphones) and Intel’s Atom processor will have a hard time gaining traction.

This entry was posted in semiconductor. Bookmark the permalink.