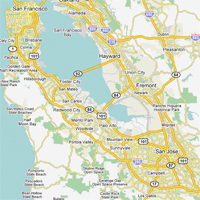 Here’s a quote from Tom Siebel, the founder of Siebel Systems that pioneered customer-relationship management before Salesforce.com started to eat their lunch and Oracle bought them.

“I think Silicon Valley has been toppled from its pedestal. I think information technology is much less important in the global picture today than it was even 10-20 years ago. … I think the areas where people will be making a difference and making important social and economic contributions will be in the area of energy and bio-engineering. While there will be contributions in bio-technology and bio-engineering and energy technology that will come out of the valley, I do not believe it will have the type of global leadership position in those areas that it did in information technology."

I’m not sure this is right. Firstly, I’m not sure information technology is less important than it used to be. Of course biotechnology and energy technology will become more important and so IT will decline relatively, but I doubt it will decline absolutely. I mean it’s not like the Internet is done innovating.

I’m a little skeptical about some of the energy technology. In the long term it will be very important. In the short term it is simply farming government subsidies which is not a recipe for creating game-changing technology. I’m with Vinhod Khosla that unless the technology makes sense in the context of China and India, then it is just feel-good technology akin to putting solar panels on the roof of the Moscone center in the world’s most famously foggy city.

Biotechnology is clearly increasing in importance. But there seems to be plenty of it in Silicon Valley (which, of course, no longer produces any silicon directly since that is not the highest value part of the chain). Silicon Valley certainly knows how to do innovation, create companies, manage intellectual property, embrace change. Not attributes that are thick on the ground in, say, Detroit. Or Washington, although it is now a big hub for technology simply because of the vacuum sucking money up from all over the US and disbursing lots of it locally in DC. Interesting to note that Morgan Stanley held their big partner offsite in Washington, not New York, for the first time ever. In industry after industry, success is starting to come from getting the government to write the rules your way rather than outright competition (see automotive, pharmaceutical, banking, insurance, to go along with the long standing agriculture, energy).

So I think that Silicon Valley will do fine (depending on California’s state governance not getting into a tax/exodus death spiral as places like Detroit have done) although it is true that as technologies develop they also proliferate into other parts of the world. Silicon manufacturing was originated in Silicon Valley almost exactly 50 years ago; now it is mostly in Asia. A lot of the ideas in the PC (and Mac) originated in Silicon Valley at SRI and Xerox PARC (not to mention Berkeley and Stanford) but development is done everywhere. I’m sure other technologies will be the same.

I think Silicon Valley has two unique attributes. Firstly, in the same way as Hollywood is the easiest place (but not the cheapest) to make a movie since all the infrastructure is there, Silicon Valley has all the infrastructure for creating innovative companies. And secondly, Silicon Valley (and to a lesser extent other parts of the US) is good at sucking in the best talent from all over the world and integrating them into companies and making them productive. The company I (a Brit) ran last year was founded by an Israeli, had an Iranian CTO, a French lead engineer, Dutch and Russian engineers, Korean and a Columbian AEs to go with a couple of born in the US americans. The VC board members and investors were a Cypriot and a Vietnamese immigrant. Just look at the first two people there: an Israeli founder and an Iranian CTO. I don’t see that happening in Tel Aviv or Tehran. They had to come here to do that.

This entry was posted in silicon valley. Bookmark the permalink.