Why did EDA have a hardware business model? 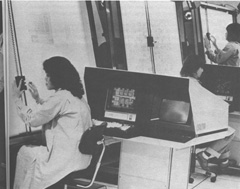 EDA really started back in the 1970s (late 60s in fact) with companies like Calma and Applicon. They drove the first EDA transition from cutting rubilith, red sticky plastic that was physically cut with X-acto knives, to digitizing the input and generating pattern-generation tapes for automated mask-making equipment. One legacy of this era remains with us today: Calma’s system was called the Graphical Design System or GDS, and the second generation (32-bit!) was called GDS-II. Normally it stored its data on disk but it had a format, called “stream format” for writing the data out onto magnetic tape. The disks were too small to keep the designs there permanently. This format, GDS-II stream format (or often just GDS-II or GDS) was the standard for decades for moving layout data between systems and from design environment to mask shop. It is still not dead although it is definitely coughing up blood. The transition to Oasis or other formats has gone much slower than expected. Everyone supports GDS-II and so it is the least-common denominator format.

Calma and Applicon initially thought of themselves as hardware companies. They sold computers. Calma was actually a Data-General minicomputer (it’s nothing directly to do with EDA but if you’ve never read it, you must read Soul of a New Machine about development of the 32-bit version). The business model was the same business model as most hardware was sold: you bought the hardware, digitizers, screens and so on. See the picture. And you paid an annual maintenance contract for them to keep it all running which was about 15-20% of the hardware cost per year. The software was simply bundled into the price. This was before the days of a separate pure software industry; almost all software only ran on one brand of computer the way cell-phone software or digital camera software is sold today: you can’t buy it separately, it’s bundled with the hardware.

The next generation of EDA was also hardware-based. Gate-level design was dominated by the DMV: Daisy, Mentor, Valid. Daisy built the Daisy Logician, Valid built the Scald-station (I think that was the name) and Mentor OEMed Apollo workstations instead of building their own. The business model remained the same: buy the hardware and pay an annual maintenance. I don’t know if the software was even a separate line item.

It is hard to believe, but back in that period there was a worry in EDA that as the hardware costs came down (Moore’s law) then software costs would have to come down too. It was hard to believe that someone might pay more for software than the hardware on which it ran. After all, they never had before. Today, when you can run millions of dollars of software on a box costing a few thousand dollars this seems comical. But go back to the cell-phone software I mentioned earlier. Maybe one day we’ll be paying $500 for good cell-phone software from an independent market, and then buying a cheap phone for $10 on which to run it. After all, that’s where the value increasingly is.

The next generation of EDA software, VLSI Technology (where I worked), SDA, ECAD (that together became Cadence), Silicon Compilers, SDL and other companies that I’m sure I’ve forgotten, wrote software that was more hardware independent. They would run on Vax (always) and one or more of those new-fangled workstation thingies from Apollo (or Sun once they made it to production). They would usually sell you the hardware if you wanted, but you could just buy the software and run it on your own hardware. The business model was the same old hardware business model though: pay an upfront license and annual maintenance of 15-20%. This was how we ended up at first with a hardware business model for a software business.

The final change was the switch to the time-based license, initially 3 year, that we largely have today. Essentially this is a software lease. Gerry Hsu1 is usually credited with this. He told me that he noticed that people like to lease cars so that they get a new car every 3 years or so, and decided to see if you could sell software the same way. It turned out to be a good idea and the financial side of the business liked it since it gave very predictable revenue. In any given quarter, most of the revenue was business booked in the three years before, and only a small amount from the new business booked that quarter.

Business is still done as a mixture of time-based licenses (recognized over the period) and term business (recognized up-front). But, as I said earlier, the mix is open to abuse and only the savviest followers of the industry realize how critical the percentage of ratable business is in trying to decide if an EDA company is doing well or not. It remains tempting for an EDA company to persuade a company to do that $10M deal as a term license instead of a time-based license. The $10M is recognized immediately and can fill an embarrassing $10M hole caused by the lack of $100M of time-based bookings.

1 By the way, Gerry Hsu is sometimes portrayed as a bit of a buffoon. But he was certainly extremely smart, and very perceptive. Just somewhat ethically challenged. I worked for him for 8 hours!

This entry was posted in marketing. Bookmark the permalink.