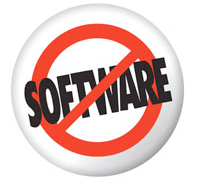 SaaS, or software as a service, is the capability to deliver software over the net. In web 1.0 years this was called the ASP model, for application service provider. The archetypal company doing this is Salesforce.com, which provides customer relationship management (CRM) software for businesses, initially small and medium sized. This was in comparison with companies like Siebel (now part of Oracle) who used the traditional installed software model, basically the same model as almost all EDA companies use.

So will SaaS take over EDA? The advertised advantages of SaaS are a lower cost of sales, faster update cycle for the software, and that it can be incrementally adopted one seat at a time. And several EDA companies, some small, one called Cadence, have announced SaaS offerings already.

I think that the dynamics of the business process are very different for EDA. One assumption in SaaS is that by lowering the barrier to entry to a single seat bought over the net, as opposed to a corporate deal, the market can be expanded to people who corporate deals don’t reach, or at the very least it will steal significant market share from the big guys. This was salesforce.com’s base, initially selling to people who would not have bought a CRM system, and then stealing users from the big guys. It is classic Innovator’s Dilemma disruption, starting not by stealing business from the established market leaders, but going where the competition is "non-use."

But most EDA is not like that. There is no crowd of unsatisfied IC designers just waiting to build chips if only place & route were cheaper. And as to undercutting the big guys, any innovative business model that turns EDA into a smaller market is likely to reduce investment in EDA, which gets problematic very quickly. Stealing a market segment Craigslist style, by turning a billion dollar market into a million dollar market and dominating it, will not be able to sustain the R&D needed. The reality is that you can’t compete much on price in EDA: there is no market to expand into, and if you succeed in stealing a lot of market at a low price then you had better genuinely have lower costs (especially in R&D) to be able to do it again for the next process node. It is a similar problem to the one in pharmaceuticals. Drugs cost a lot less to make than they sell for, but if you artificially (by fiat or excessive discounting) reduce the prices too much then current drugs are cheap but no new ones will be forthcoming. Unlike with drugs not developed, if there are no workable tools for the next process node then we will all know what we are missing; it is not just a profit opportunity foregone, it is a disaster.

The next problem with EDA is that you can’t get the job done with tools from only one vendor. So if you use SaaS to deliver all your EDA tools, you will repeatedly need to move the design from one vendor to another. But these files are gigabytes in size and not so easily moved. So it seems to me that if SaaS is going to work, it has to be  through some sort of intermediary who has all (or most) tools available, not just the tools from a single vendor. If you use a Cadence flow but you use PrimeTime (Synopsys) for timing signoff and Calibre (Mentor) for physical verification then this doesn’t seem workable unless all are available without copying the entire design around.

Another problem is that SaaS doesn’t work well for highly interactive software. Neither Photoshop nor layout editors seem like they are good candidates for SaaS since the latency kills the user experience versus a traditional local application. Yes, I know Adobe has a version of Photoshop available through SaaS, but go to any graphics house and see if anyone uses it.

There are some genuine advantages in SaaS. One is that software update is more painless since it is handled at the server end. You don’t normally notice when Google tweaks its search algorithm. But designers are rightly very wary of updating software during designs: better the bugs you know than some new ones. So again, EDA seems to be a bit different, at least has been historically.

The early part of the design process and FPGA design are a better place for SaaS perhaps. The files are smaller even if they need to be moved, the market is more elastic (not everyone is already using the best productivity tools). But this part of the market already suffers from difficulty in extracting value from the market and SaaS risks reducing the price without a corresponding true reduction in cost. Walmart is not the low price supplier because it has everyday low prices; it has everyday low prices because it has got its costs lower than anyone else’s. Perhaps the ideal market is FPGA design where the main tool suppliers are not really trying to make money on the tools directly, and where few of the designs are enormous.

So if SaaS is going to succeed in EDA, my guess it that it will either be a virtual CAD organization offering tools from many vendors, or else in the FPGA world where single-vendor flows are common.

This entry was posted in eda industry, marketing. Bookmark the permalink.