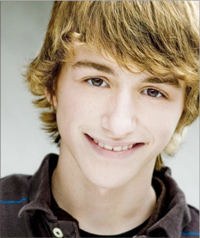 Entrepreneurs are all twenty-somethings straight out of college these days aren’t they? Not so fast, it turns out that this is an illusion. It’s probably true in some areas, such as social networking, where the young are the target audience too (at least initially).

But the Kauffman Foundation has done some research on the ages of entrepreneurs which they announced earlier this summer. Take a look at the chart below. First, I apologize for how hard it is to read, Edward Tufte would not be pleased (and if you don’t know who Edward Tufte is then rush and buy “The visual display of quantitative information” immediately, and then perhaps his other books too). 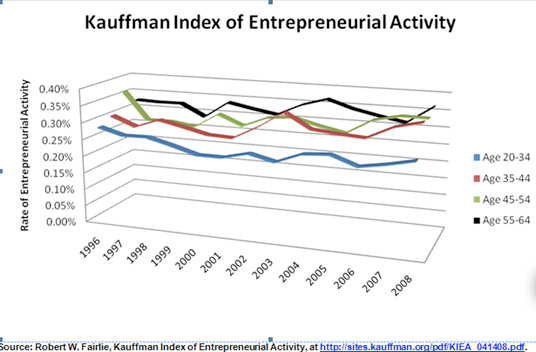 The chart shows how recently, if anything, older entrepreneurs have been increasing. But at the very least is shows that there are plenty of entrepreneurs at all ages.

Of course there are entrepreneurs who are even younger too. My son works for YouTube and the most popular channel there is an annoying teenage kid called Fred who speeds up his voice. He is on track to be the first YouTube millionaire and is currently making over $50,000/month by selling ads and merchandize. There are 1.5M people subscribed to his channel.

Talking of being entrepreneurial, here’s one of my ideas. Most sites on the internet are largely developed by people for people like themselves, at least initially. On this basis I think older retired people must be an underserved demographic. They are also the richest age-group (in most countries there is a vast transfer of money from young to old going on in ways that will not be sustainable for the current younger generation by the time they are old). And they have lots of time, which is a scarce commodity. And many of them, although not all, are online. So I haven’t managed to think of a great idea but I firmly believe that this is a great place to look for an opportunity.

So entrepreneurs come in all ages although the kids that make it big seem to get all the publicity.

This entry was posted in culture, investment. Bookmark the permalink.