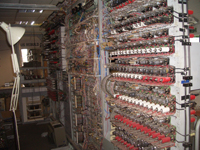 I spent a day last week at Bletchley Park, about an hour north of London. As I think is now well known, during the Second World War this was where a team of smart people, notably Alan Turing, broke the German Enigma codes. As a result, the allies got the U-boat losses to convoys in the North Atlantic under control, among many other tactical advantages that came from already knowing the German battle plans. The work at Bletchley is estimated to have shortened the war by two years.

They did the code-breaking by a whole mixture of techniques, the two most notable being the Bombes, which were electromechanical relay-based computers (although not programmable) and Colossus, which was really the world’s first electronic digital computer.

The story of Bletchley Park only came out in the mid-1970s when it first became known that through much of the war the British and Americans had been able to read a lot of the German traffic within a short time of its being transmitted. It also turned out that many of the people heading up computer science departments in the UK (such as Donald Michie in Edinburgh where I was at that time) had worked there secretly during the war but were not allowed to reveal anything about it. 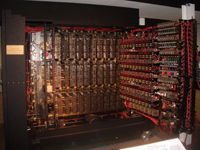 It is interesting to see the different attitude to secrecy and commercialization in Britain and the US. After the war, apparently under orders direct from Churchill, all the machines, all the drawings and everything connected with Bletchley Park were destroyed and everyone involved bound to secrecy for thirty years (some things were only declassified in 2002!). I only discovered recently, long after she died, that my great aunt had worked there. In the US, the military organized seminars for academics to propagate the knowledge of computing built up during the war. As a result, the central focus of computer science moved to the US, and the fact that at the time Britain was the world leader was squandered. The hounding of Turing for his homosexuality leading to his (probable) suicide is, of course, another blot against Britain and another setback for British computer science. Destroying the only digital computers in the world for no good military reason seems like pure vandalism.

Colossus is an interesting machine. It has 2000 tubes (or valves as they are known in British English) and a paper tape reader that runs at 5000 characters per second (that’s over 40 feet per second). The paper tape essentially forms the memory of the computer since at the time there was no viable memory technology. Acoustic mercury delay lines that would be used for the first digital computers such as EDSAC had not yet been invented. The tape contained the message to be decoded and was recycled through the machine every second or two. The sprocket hole on the paper tape was used to generate the system clock and keep the computer synchronized with the tape-reader.

Colossus was actually built using standard phone exchange technology of the day in the GPO (General Post Office, mail and telecoms still together at that point) laboratories at Dollis Hill by an unsung hero Tommy Flowers. The timing of building the replica in the 1990s was fortuitous. British Telecom (which the telecommunication part of the GPO had morphed into) was upgrading the last old electromechanical exchanges and discarding a lot of the right types of uniselectors, tubes and the like. In 2007, the rebuild was finally completed and a message was encrypted using an original German Enigma machine in Berlin, transmitted to Britain, and then decrypted using the rebuilt Colossus in about 4 hours.

If you are a computer scientist (or interested in military history) I highly recommend a visit to Bletchley Park. It is a couple of hundred yards from Bletchley railway station, which itself is about 45 minutes from London Euston station. So if you are in London it is an easy half-day trip. It also houses the British Computer Museum, the equivalent of the Computer History Museum in Mountain View.

There are also lots of books. I recommend Andrew Hodges’s book on Turing The Enigma and Gordon Welchman’s (unfortunately out of print in the US but not the UK) book on the details of the code-breaking The Hut 6 Story. There are dozens more.

This entry was posted in culture. Bookmark the permalink.